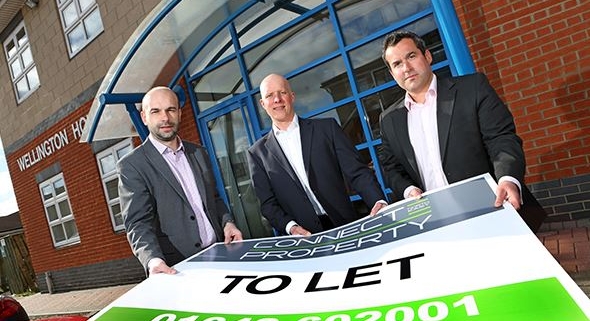 Property consultant Connect Property North East (CPNE) has celebrated its first year of trading by scooping a prestigious industry award for the most active industrial agent across the region.

The award, presented by national industry publication Estates Gazette, recognises the practice achieving the largest number of transactions across the region in a 12 month period. First place was share jointly with an international practice.

Tim Carter, Director of CPNE said: “This is testament to the 12 months of hard work that we have put into getting this new practice up and running and we are extremely proud of this achievement, and we would like to thank all of our clients for supporting us and helping to make this possible.”

The award represents a diverse and varied specification of building ranging from as little as 500 sq ft on Whitestone Business Park in Middlesbrough to a 93,000 sq ft workshop acquired by the Jennings Group in Stockton on Tees, making up over 70 individual transactions over the course of the year. The award is a further accolade for Tim Carter who, in 2013, was named the Estates Gazette most active deal maker for the whole of the North East.

Jonathan Simpson, fellow Director and Co-Owner, added: “2015 saw a significant level of take-up of industrial and warehouse space across a huge range of varying size and age of building.

“Over the last 12 months we have seen how the strong occupational market in the North East continues to fuel and drive the investment market across the region. Rental growth in the sector has continued to rise, triggering significant investment, with the A1 corridor continuing to be the region’s top performing area.  MSeven/M&G has invested more than £1m across various holdings across Newton Aycliffe, resulting in the take-up of more than 100,000 sq ft of space to occupiers that include Vantec, PWS and Ceva Logistics.

“In Darlington, rents at Morton Park have started to rise following the £4m-plus purchase by Rockspring in partnership with Caisson, with rents hitting the £5.50 per sq ft mark on smaller units for the first time. The end of last year saw Darlington’s biggest letting for a number of years, comprising of 25,000 sq ft to JLM Foods at the award winning Lingfield Point, which itself was acquired by Clearbell at the back end of 2014”

Tim said: “Across on Teesside, occupancy levels have continued with significant investment in industrial stock by larger the stakeholders in Teesside, such as Mandale and UK Land Estates. Teesside Industrial Estate has seen the biggest level of activity, where we concluded 14 separate transactions and have seen rents rise to the £6 per sq ft level. Occupier activity on Teesside has been primarily the expansion and relocation of smaller SME’s but with the likes of Cooper BMW expanding and A-Plant acquiring new premises on Haverton Hill.”

Notes for editors: Founded in 2015, Connect Property North East is an independent firm of Chartered Surveyors based in Teesside, providing commercial property advice across the Industrial, Office, Retail and Investment sectors.

Want to join the discussion?
Feel free to contribute!